eCommerce: How Much Does Magento 2 Cost?

* Numbers here are based on quoted Magento book pricing. As a company, they are transparent in saying that the combined cost of hosting and Enterprise licensing is negotiable.

Magento continued offering a free Community Edition (CE) when the platform rolled out at the end of 2015. Overall, Magento 2 CE inherits much of the platform-wide architectural improvements made in the Enterprise offerings, with notable exceptions around scalability, promotions, security, merchandising, loyalty, and customer support.

A Magento 2 Enterprise Edition license cost starts at $22,000.00 annually for merchants generating less than $1 million and pricing tiers up based on revenue. In other words, the more gross revenue a merchant generates, they move up to the next revenue tier and the license will cost more. Other platforms like Salesforce Commerce Cloud (previously known as Demandware) don’t have revenue tiers – instead their license fees are based on a direct percentage of gross revenue and license fees therefore increase with every additional dollar in revenue.

For a bit of historical context, Magento Enterprise Edition used to have a per-server pricing model. This worked well and made sense when most companies used traditional hosting environments (e.g. on-premises, collocated, etc.). Over the last few years, more companies have increasingly used cloud-based hosting on hosts like AWS. Given the inherent flexibility in the number of servers online at any given time in a cloud hosting setup, the per-server pricing completely broke down.

Overall, the adoption of a pricing model based on revenue tiers makes a lot of sense. While it will be a significant cost change for many Magento clients, it adjusts pricing to be more inline with the direction of the industry. For merchants in the middle of the revenue tiers — in the $5 to $25 million range — the case to be made for Enterprise Edition is much easier. For businesses generating less than $5 million in revenue, if you look at the amount spent on licensing versus the revenue being generated by the site, it’s tougher to make the case for Enterprise over Community Edition.

Magento 2 Enterprise Cloud Edition is a new offering as of the Magento 2 platform release and combines both an Enterprise license and hosting in a single fee structure. Pricing starts at $40,000.00 annually for merchants generating less than $1 million. For new Enterprise Cloud Edition clients, Magento offers monthly payments to distribute the ongoing annual cost of the system over the course of the year.

Overall, it appears that most mid-sized merchants will end up getting a lot more value for their money within Magento Enterprise Cloud Edition due to the number of adjacent services and protections that Magento has built into the managed platform. For a taste: 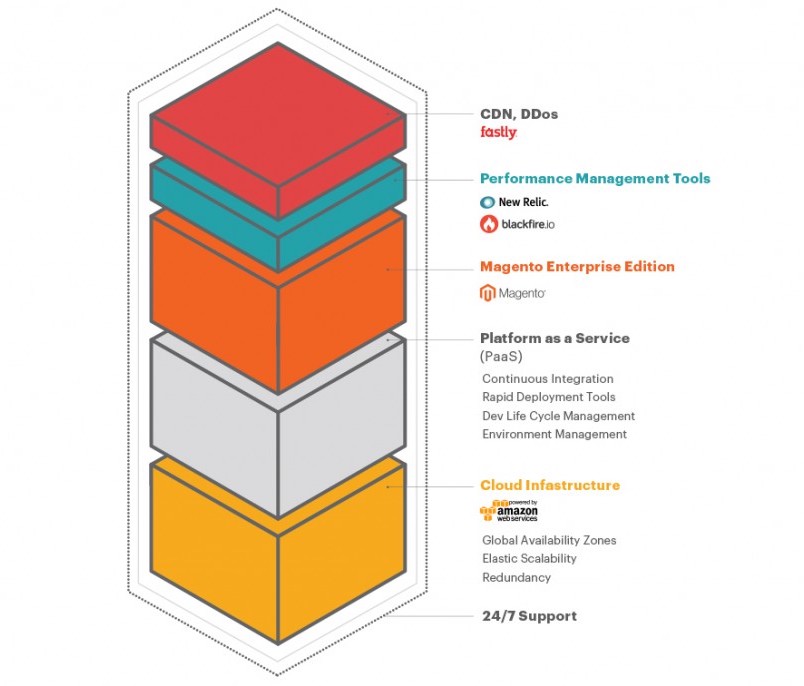 For essentially the cost of a Magento Enterprise Edition license and a reasonably-sized AWS cloud setup, Magento is including additional services, including:

It’s a comprehensive lineup of tools that most mid-market merchants already investing in Magento Enterprise Edition are likely all paying for. The ability of having all of these in one place is definitely an attractive option. At this point, Magento doesn’t separate out the cost of the licensing of the application from the cost of the hosting infrastructure so there’s no way to draw line-by-line comparisons.

Summing It All Up

The cost of Magento 2 varies widely depending on whether or not you’re going the free versus paid route. It’s great that Magento still offers a free, though somewhat limited, version of their ecommerce platform. With the changes in their pricing for Enterprise Edition, as well as new offerings in Enterprise Cloud Edition, Magento is hoping that more merchants upgrade and invest in the paid options.

Given the changes to Magento’s overall offerings and increased competition at the smaller end of the merchant spectrum — in the $1 million gross annual revenue range — we suspect that more higher-revenue merchants will strongly consider Enterprise Edition or Enterprise Cloud Edition going into the future.

efelle has been building best-in-class eCommerce websites since 2005, and has experience in all leading platforms. We offer a free consultation to look at your business' goals and how they can be reached; call us at 206.384.4909 or email [email protected].